Order Ahead for Pickup
Find a PROTEINHOUSE near you or See all Locations.
Log InRegister Cart

It was the eating that she found most difficult about her 10-year career as a world-champion bodybuilder. The 37-year-old Las Vegan, originally from Brasilia, Brazil, could only trust meals she prepared herself, which was far from ideal.

“I’m a terrible cook,” Reis said. “Since I started competing, all my meals were very boring because I didn’t know how to cook. I always said, ‘If only I had cooks to do what I want and put in a little more taste.’ ”

Now she’s got a team of cooks, and not only for her own benefit. Reis and then-boyfriend/fellow bodybuilder Andrew Bick opened ProteinHouse restaurant three years ago near Eastern Avenue and Silverado Ranch Boulevard, and have operated it ever since. It’s one of the most successful local examples of the booming healthy-restaurant industry. Research from the National Restaurant Association indicates 7 out of 10 adults have started to eat at healthier restaurants in the past two years. And Forbes reports that projections indicate global sales of healthy food products will eclipse $1 trillion in 2017. 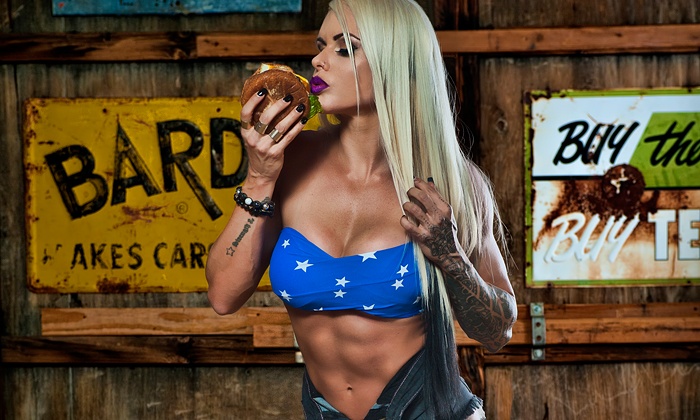 “I’m happy to be a part of health-food restaurants all across America,” Reis said. “I don’t see it as competitive, to be honest. I get really happy when I see other health-food openings because I think that’s what people need.”

Reis hopes ProteinHouse separates from the pack by being more inclusive. The restaurant caters to everyone from the mostly carnivorous (the muscle-builder burger has two bison patties topped with Canadian bacon) to vegans (the vegan bowl has 13 vegetables).

It also makes the common health-food promises of never freezing any meat and only using high-quality ingredients.

“I’ve seen people say they don’t want to come here because they don’t feel like they’re in shape,” Reis said. “I say, this is where people get motivated. We don’t care what you look like.”

Reis took up bodybuilding to go with a modeling career, and moved to Miami to realize her dream of becoming the first Brazilian to win an International Federation of BodyBuilders championship. She lived in South Florida for a few years before moving to Las Vegas six years ago to be with Bick.

The two decided to open the restaurant as a precursor to whittling down their travel schedule for competitions and starting a family, but broke up under the pressures of working together.

“It was so stressful when the restaurant first opened up,” Reis said. “The whole team, we had to fire when we started. It was really difficult, but we were naive, too. I think the hardest part is to find good people who can work for you who you trust.”

ProteinHouse settled in during its second year. Bick undertook management duties, with Reis putting more emphasis on outside tasks such as marketing and financing. And they found the right people.

That’s when the restaurant started to take off. Word spread particularly fast in bodybuilding circles, and Las Vegas being a frequent stop for many in that community, gym rats would return to their homes and crave more.

The first franchised location opened this year outside of Salt Lake City, and five more, ranging from Orange County, Calif., to Kansas City, Mo., are set to join in the coming months.

“We were not thinking about franchising or anything when we opened,” Reis said. “We just wanted a place where we could come and eat.”

The restaurant has turned out to be much more than that, and is usually full of patrons in gym clothes from breakfast starting at 9 a.m. to dinner concluding at 10 p.m. Reis retired from competition last year, though she still maintains a strict diet and works out as diligently as ever.

She’s not ruling out a return to bodybuilding, but for now, it’s all ProteinHouse. Stopping by the restaurant sure beats dreading the next meal.

“When I didn’t have this restaurant, we had to be doing our own food all the time,” Reis said. “Every Sunday, I’d prep my meals for the week because we wouldn’t have time to cook because it takes a long time. It’s boring because you get the meal cold, put in the microwave and lose the nutrients because it’s not fresh anymore. That’s one thing we don’t have at ProteinHouse.”

Building muscle, and maybe an empire was last modified: October 9th, 2017 by phadmin